Bushfires are an annual occurrence in Australia and the continent has always experienced wildfires. Apparently, Australia has a ‘fire season’ for crying out loud as every summer season (which is marked from December to February), the episodes of wildfires are very common.

But the drought conditions and unprecedented heat, which the country experienced throughout the last year, have intensified the fire in this bushfire season. People have been sharing the heart-wrenching pictures and videos of this catastrophe on social media.

The fires in Australia are devastating – and the crisis is still ongoing.

More than 5 million hectares have been burnt, and this number continues to climb – that’s the equivalent of one fifth of the entire UK. #AustraliaBushfires pic.twitter.com/jh9ZWQWQei

Fires across Australia have burned more than 10 million hectares, marking one of the country’s worst bushfire seasons on record. Raging fires have destroyed thousands of homes, killed many people, and taken the lives of millions of wild animals, and burned down 80% of the Blue Mountains, and 50% of the Gondwana world heritage rainforests.

Origin of the Bushfires Bushfires burning through the Blue Mountains in Australia / Image: The Sydney Morning Herald Homes destroyed in a fire in Batemans Bay / Image: The Sun The raging fire engulfed much of the Green Whittle Creek / Image: The Sydney Morning Herald 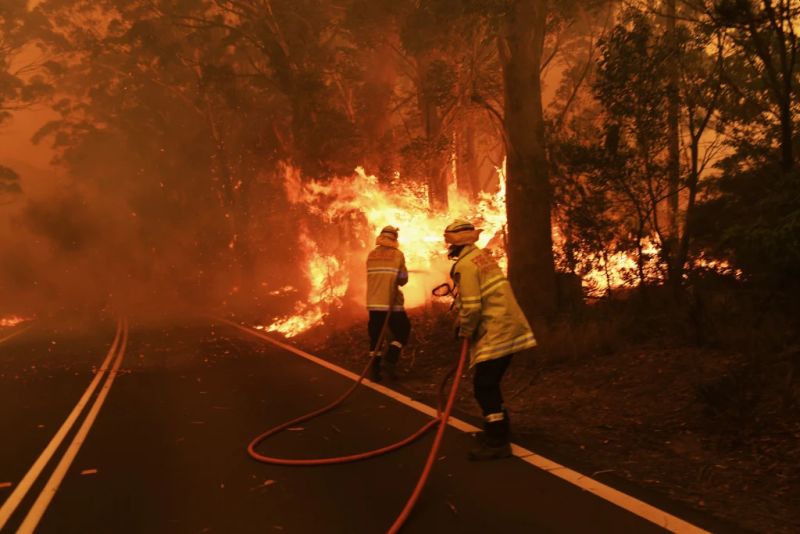 Thick plumes of smoke rising from the burning East Gippsland / Image: The Sun Mogo, a town on the NSW south coast has been devastated by bushfires / Image: The Sydney Morning Herald

Also Read: Raging Amazon Rainforest Fires – Why it Matters to Everyone on the Planet

This is the situation in Mallacoota at the moment. A mother and her kids are sheltering in their boat on the water. People are reporting the sound of gas bottles exploding in town and quite a few homes have been burnt. @abcmelbourne #gippsnews #gippslandfires pic.twitter.com/XhS5SVvgqX Thousands of people waited at Mallacoota beach to be evacuated / Image: The Sun Kangaroo running past a burning house in Conjola, NSW, on New Year’s Eve / Image: The Sun Fires in the state of Victoria that has burned 780,000 hectares / Image: ABC People were taken aboard HMAS Choules to safety / Image: BBC Tomakin in NSW has been destroyed by the bushfires / Image: The Sydney Morning Herald Firefighters at a fire in Corryong / Image: The Guardian

The raging wildfires have brought massive death and destruction with them. Over 29 people have lost their lives, the number of dead animals is estimated to have reached a billion and thousands of animals have endured injuries in the wildfire that has also destroyed an unaccounted number of forests and outlying properties. Dead livestock on a property southwest of Cobargo / Image: The Sydney Morning Herald

On Kangaroo Island, which is considered the biggest and safest habitat for kangaroos and koalas, the fires have burned through 160,000 hectares, killing thousands of animals of various endangered species.

The rising temperature and variable winds are making it very difficult to control the wildfire. The western side of the island is still ablaze, destroying the biodiversity-rich area.

A shocking video of dead animals strewn across a roadside in New South Wales killed in the #AustralianBushfire .

At least 480 million mammals, birds and reptiles are likely to have died in the state alone since September. Devastating. Charred carcasses of wild animals lay around after the bushfires / Image: The Sun

The western half of the island was home to about 25,000 koala bears and very few have survived through the bushfires.

The fire department and many other volunteers have been rescuing the wild animals and nursing them back to health. Despite the arrival of rain on January 9, the bushfires still continue to rage on. New South Wales remain under a state of emergency, while the fires are also threatening parts of Victoria and Australia Capital Territory.

Meanwhile, the people are furious at the Australian Prime Minister Scott Morrison for not providing them enough resources to battle this catastrophic event and for his careless attitude on the climate crisis. Earlier he went for a family vacation in Hawaii during the continued incidents of bushfires in Australia.

During his visit to bushfire victims, the people were hostile and unfriendly toward Morrison. The victims accused him of being careless and demanded that more funds should be provided to Rural Fire Service so they could efficiently control the wildfire.

People across the world are making donations and raising funds to help the victims of bushfires in Australia. The Australian Red Cross is accepting the contributions towards its Disaster Relief and Recovery Fund, which has so-far deployed 1,285 staff and volunteers to disaster-affected communities.

Volunteer organization BlazeAid is accepting donations to help rural families rebuild after the damaging bushfires in Australia. The Port Macquarie Koala Hospital, which helps rescue and treat injured koalas, is accepting online donations. A separate GoFundMe campaign has raised more than $4.7 million for the organization.

Celebrities who’ve lent a helping hand to the victims.

✦ Elton John, the Marvel star Chris Hemsworth and the heavy metal act Metallica are the latest big names to donate significant amounts to the Australian bushfire relief effort, with John and Hemsworth each committing A$1m (£523,000) to the cause.

✦ Earth Alliance, a new organization co-chaired by actor Leonardo DiCaprio, announced to donate $3 million bushfire fund, which will be directed to assist the firefighters, help the local communities, and save wildlife.

✦ A pledge of $48 million was made from Australian mining billionaire Andrew Forrest’s Minderoo Foundation.

✦ The Australian comedian Celeste Barber has helped with over $20m in donation and likewise celebrities Pink, Nicole Kidman made considerable donations to help the New South Wales Rural Fire Service fight the devastating bushfires around the state.

✦ Facebook announced its own ~$170,000 donation to the Australian Red Cross. The social media giant will also match up to $700,000 in donations made to GlobalGiving’s Australian Wildfire Relief Fund.

✦ The donation will go to WIRES Wildlife Rescue, WWF Australia and the Rural Fire Service.

The world has come forward to help Australia amidst the fiery crisis. Though the donations and funds might bring temporary relief and recovery aids to the victims (humans and animals alike), the crisis is not over yet.

Despite the showers of rain that brought a sigh of relief, the fires are predicted to increase. People are praying for Australia and lending a helping hand from all over the world.

The plumes of smoke are not only hovering over neighboring New Zealand but have also reached the western continents. The environmentalists are worried that the continued emissions through the bushfires are contributing in a major way to global warming. Effectively it is affecting the whole world.

Meanwhile, the New South Wales government is dropping vegetables from the sky for survival and recovery of the starving animals in the critical time when the fires have burnt down all-natural food sources. The officials have dropped down 2,000 pounds of sweet potato and carrots across the different colonies in the past week.

The fresh green shoots sprouting from the trees after the devastation by bushfires have shone a ray of hope for the masses. Many of the plant species in Australia have experienced fires for tens of millions of years. The flora of the country has modified itself to survive during the wildfires through re-sprouting and regeneration.

It’s promising to see this State Forest regenerating after the bushfires. New shoots from the trunks of koala food trees, and the sprouting undergrowth brought a smile to our faces.

A post shared by Port Macquarie Koala Hospital (@portmacquariekoalahospital) on Dec 9, 2019 at 1:16am PST In Australia, while recent rains have offered limited hope in some areas, there is not likely to be a much greater respite in the next two months. Although the rains brought brief relief to the people, it is unpredictable if the rains will pacify the ferocity of the raging wildfires.

Where the rains have brought some relief from the fires, it has also contaminated the waterways by washing ash and sludge from bushfires into the Macleay River in New South Wales. The washed away ash has suffocated aquatic life and the riverbed stinks of rotting vegetation and dead fish. The reported dead fish species include Australian bass, eels, bullhead mullet, yellow-eye mullet, herring, gudgeons, and catfish.

The locals say that the rain in the past few days has seen more ash and mud from the parched and burned landscapes running into the river. Rainfall events are adding ash from the extensive bushfires throughout the region into local catchments, as well as other organic matter and sediment. This can cause rapid drops to oxygen levels in the water. The bushfires in 1939 had caused the ash from bushland to run into Lachlan River and the fish population never recovered. It will take a long time to restore the river’s health back to normal and it is likely to deeply affect the marine population depending on the river. The recent session of rain and thunderstorms have dumped much-needed rains on bushfires but may have caused other problems. The ash and sludge from the bushland are likely to contaminate most of the catchments in eastern Australia. 80 fires out of 130 have satiated and the remaining will soon be under control. Sydney had its wettest day in four months.

Thunderstorms and heavy rains are likely to bucket down in Australia’s east coast on January 18. The states of Victoria, NSW, and Queensland were badly hit by wildfires, killed 29 people, burnt down 2500 homes, and scorched millions of acres of land.

Parts of Queensland’s south saw triple the monthly rainfall overnight. Farmers in NSW and southern Queensland rejoice as the severe spell of drought broke after the creeks flowed again. More rainfall has been predicted to cool down the heat in eastern Australia in the coming days.

Rain and storms have provided useful falls over much of east #NSW in the past few days. Further rain will fall in the east of the state, especially the north east until Sunday. On Monday falls will shift to be heaviest in the south east. NSW forecast: https://t.co/YYPYaRT8Sc pic.twitter.com/6psr0tZPi8

In the meantime, a search dog named Taylor has been finding injured koalas during the bushfire crisis. The 4-year-old English springer spaniel ventures into burnt-out bushland and sniffs out the scent of fur of koalas or their faeces. Several of the koalas found by Taylor have been treated at Port Macquarie’s Koala Hospital.

Taylor has been focused on finding injured koalas since she was just a few months old and now has become an expert in the job. The trainer Ryan Tate, who runs the Tate Animal Training Enterprises that specializes in detector dog services, says that when told “Koala, Find!”, Taylor starts running around sniffing out the animal and each time she finds a koala, she is rewarded with a tennis ball or culinary treat.

Not only the human population, but the wildlife is also deeply affected by these recurring wildfire incidents. If the fires are not controlled and eliminated soon, it could drastically change the complexion of the land down under.