Upcycling food waste into delicious foods and snacks has grown as a wonderful trend to upcycle the vegetable and fruit overages, which otherwise would have gone to dumpster

Once a side market and mostly residing in health food stores, upcycled food is rapidly becoming mainstream. From vegetable stems turned into chips and leftover juice pulp transformed into granola to surplus bread, upcycled food tastes exactly like food.

Plenty of upcycling food companies have taken over the market by storm, thus positively changing the complexion of our eating habits, and reducing the food waste by upcycling it.

Upcycled food has now become an officially defined term, which will motivate broader consumer and industry support for upcycled food products, helping reduce food waste. The growth of the movement parallels an uptick in consumer interest in sustainability and more eco-conscious food brands.

What is Upcycled Food?

Upcycling has been acquiring ground in substitute food movements for several years but had never been formally defined. The movement has been converting ingredients that would have been wasted into edible food products, not only prolonging the life of discarded food but reducing the amount of food waste.

However, the Upcycled Food Association had defined the upcycled food on May 19 as ones that “use ingredients that otherwise would not have gone to human consumption, are procured and produced using verifiable supply chains, and have a positive impact on the environment.” 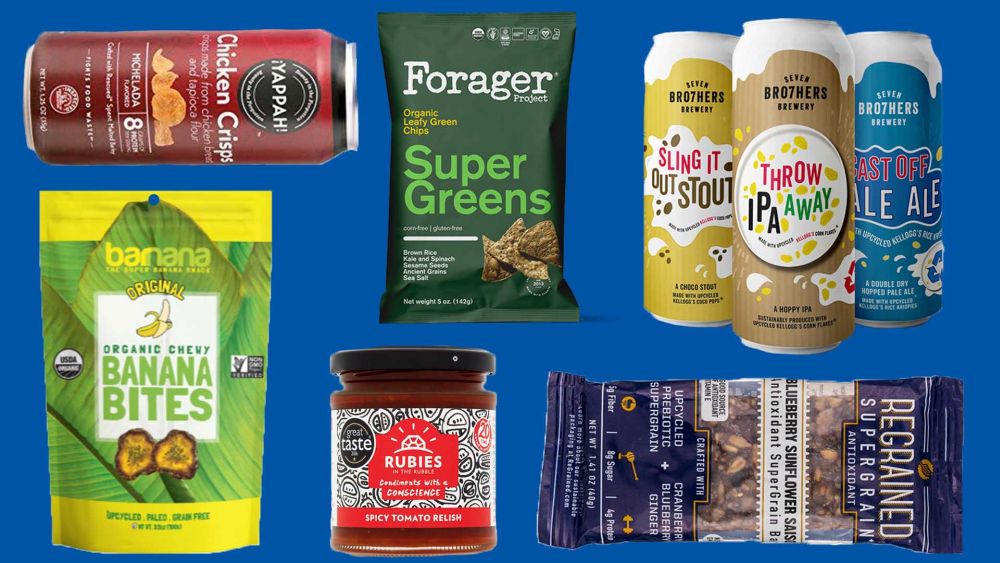 The term was defined by a working group organized by the Upcycled Food Association, which involved representatives from Harvard University, Drexel University, Natural Resources Defense Council, World Wildlife Fund, and ReFED, a nonprofit organization that evaluates solutions to food waste.

The Upcycled Food Association is a member-based industry non-profit that strives to enhance the profile of upcycled foods. The working members of the association expect that such a definition will make it simpler for food companies to show how their products influence the food waste decrease. Upcycling food waste has opened up various and innovative avenues to tackle food shortages.

According to Jonathan Deutsch, a professor at Drexel University and the director of the Drexel Food Lab, the definition is putting the functions of the trend into perspective regarding the food supply, the environment, consumers, and businesses.

According to the UN’s Food and Agricultural Organization, 1.3 billion tons of food are wasted or lost every year; which is a daunting number for food waste, given the relentlessly increasing human population that requires more food and more land for agricultural purposes.

The reality complicates the matter as the landmass of the planet is limited and agricultural expansion could result in severe habitat loss.

To eradicate food waste, a rising number of start-ups have been upcycling food waste, by utilizing technology to upcycle discarded food material into new, nutritious ingredients and end products.

It has emerged as one of the most impactful and effective ways in which the food industry can help save the environment from climate change. Many companies and nonprofit organizations around the globe are working to eliminate food waste by upcycling it and creating high-quality, nutrition-rich products.

Upcycling food waste means taking foods or ingredients that are generally thrown away for idiotic reasons – such as broccoli leaves, odd-colored bell peppers, strangely shaped ugly tomatoes, or pulp that remains after juicing process – and smartly repurposing them to produce high-quality cuisines.

Many people fear that upcycled food does not taste as good as real food, which is an obvious misunderstanding. In fact, it does taste delicious – sometimes even better than its non-recycled counterparts, it is nutritious and innovative. Banana chips made from recycled fruit are absolutely delicious. Barnana, a snack company founded in 2012, sells upcycled dehydrated banana snacks made from bruised, overripe, or otherwise imperfect bananas that are usually discarded.

Regrained makes a flour called “SuperGrain+” from protein, fiber, and micronutrients discarded after the grain is used for the beer brewing process and incorporates into tasty snack bars. It resembles toasted flour.

Render Foods partners with chefs to create new products like Weyla, a beverage that blends whey from Soroma creamery with fruits, herbs, and botanicals; and Bryner, a savory drink mix made with upcycled pickle brine that could be used to make a Bloody Mary.

Partnering with chefs from San Francisco’s State Bird Provisions, the company recreated a snack that the chefs make for themselves in the restaurant kitchen to utilize the leftover quinoa.

The tiny fruits that hold coffee beans usually end up rotting on the coffee plantations, coffee cherry waste can be converted into flour. This ingredient can be included in drinks, baked goods, and other products as well. Billions of pounds of coffee cherries go to waste each year.

However, one enterprising company is converting some of the coffee cherries into flour that can be used as a nutritious substitute to grain-based flour.

A team of food scientists from the National University of Singapore has upcycled surplus bread into a probiotics drink fortified with stomach-friendly microorganisms.

The new creamy drink is slightly fizzy and sweet. It can be stored at room temperature for up to six weeks with high health benefits.

Rise Super Flour is made from barley that has undergone the brewing process. Resultantly, the flour retains the aroma of the brew. The barley is sourced from amazing craft breweries; instead of being discarded, the complete nutritional value of barley is captured in the upcycled food item.

While most upcycled foods thrive to be plant-based, Yappah Chicken Crisps are one of the exceptions. These chips are made with leftover chicken breast and topica flour while utilizing vegetable purees leftover from juicing and spent malted barley from beer brewing.

Various companies and nonprofit organizations around the world are working to reduce food waste by upcycling food and creating the finest quality, nutritive products.

Many individuals and entrepreneurs are continuing to dive into the food waste industry and are making upcycled food products. Here are some of such brands. Founded by Ben Moore, a farmer in Kingsburg, California, The Ugly Company prevent food waste by upcycling ugly and damaged fruit and transforming it into healthy dried fruit snacks.

From dried and diced peaches to kiwis and apricots, the company upcycles the ugly fruit. In 2020, the brand prevented 142,866 pounds of fresh ugly fruit from becoming waste.

According to the company, it has saved over 135,000 kg of fruits and vegetables since its inception.

Upcycled food company Regrained makes a flour called “SuperGrain+” from protein, fiber, and micronutrients discarded after the grain is made into beer and incorporates into tasty snack bars.

Regrained has launched the innovative SuperGrain+bar line, which will consist of its stacked nutritional profile and crave-able flavors, with each bar wrapped in a first-to-market, fully-compostable wrapper.

NETZRO is an upcycled ingredient company that collaborates with large and small-scale farmers to re-harvest food byproducts and transform them into new consumable products. Projects of the company include upcycling eggshells or calcium and spent grain for fiber and protein.

Los-Angeles-based PurePlus upcycles damaged fruits and vegetables into powdered sugar substitutes that can be integrated into food and beverage products. It can be easily added to a variety of food products including beverages, nutrition bars, superfood powder blends, and baking products.

Rubies in The Rubble

Just because some fruits and vegetables are in the wrong shape, size, or color, they are often discarded. Rubies in the Rubble believe that food should be valued as a precious resource and therefore, it upcycles discarded fruit and vegetable into delicious condiments and relishes.

Apparently, 24 million slices of bread go to waste every day in the United Kingdom. Aiming to reduce bread waste, Toast Ale utilizes the donated surplus bread to replace one-third of the malted barley using in its beer brewing process.

Realizing the importance of juice pulp and the fiber it contains, Pulp Pantry works with large manufacturers to transform pulp waste from fresh-pressed vegetables into wholesome pantry staples. To minimize food waste, Upcycled Grain Project utilizes the discarded grain from the beer brewing process to produce a range of delicious and nutritious snacks that are sugar-free, packed full of protein and fiber, and incredibly flavorsome.

California-based company Barnana partners with farms in Latin America to buy bananas that would otherwise get thrown out. After dehydrating the bananas they turn them into different flavored snacks such as Chocolate Banana Bites.

The multimillion-dollar business sells products in both natural and mainstream supermarkets and has upcycled around 20 million tons of bananas.

San Francisco-based company, Ground Rules, uses imperfect and leftover fruits and vegetables to make chips without the use of preservatives.

Why is Upcycled Food important?

According to ReFED, in America alone, 52 million tons of unwanted or unused food end up in landfills yearly. From the freshwater, which is used to grow these crops that don’t end up being used, to the excess greenhouse gases required to break it all down, food waste profoundly affects the environment.

Instead of letting the food go to waste, more and more companies are finding ways to rescue it or reinvent it. Upcycled food has come as a great solution to reduce food waste. Upcycling has emerged in the past couple of years as a method for food producers to add value to byproducts or surplus ingredients that might otherwise have been wasted.

Food companies, like Philabundance and Treasure8, are repurposing safely edible ingredients, like excess milk or “ugly” vegetables, into nutritious cheeses and chips.

We can take these very large waste streams and we can upcycle them into safe, tasty, healthy products and ingredients that can work at large scale distribution.

Food waste has a significant impact on both the food system and the climatic conditions as well. The U.S. Department of Agriculture evaluates that around 30-40 percent of the food supply is discarded or wasted, which amounts to about 133 billion pounds a year.

ReFED estimates that food waste costs retailers about $18.2 billion a year. New research has shown about 40 percent of food goes to waste and accounts for about 8 percent of human-caused greenhouse gas emissions.

The impact is amplified by the water, energy, and land resources that were used in producing food that was never consumed. Project Drawdown, an organization that supports reducing greenhouse gas emissions, has identified diminishing food waste as the prime solution to reduce heating.

According to Emily Board Leib, a Harvard University law professor and the director of Harvard’s Food Law and Policy Clinic, standardizing the term is the first step toward legislation that supports upcycling.

Further research can be done to identify and leverage policy incentives to support upcycled foods as a model to reduce food waste and support a more sustainable food system.

The research shows that customers not only understand the term “upcycled” as a separate category but also see the additional value in it.

According to a benchmark study conducted by Deutsch’s team at Drexel University in 2017, consumer surveys pointed “value-added surplus foods” as being suggestively different from conservative products and favored the term “upcycled” over eight substitutes.

The Upcycled Food Association aims to use the new definition as a way to signal to customers that food waste reduction claims on products are dependable and certifiable. How to Recycle Kitchen Waste at Home