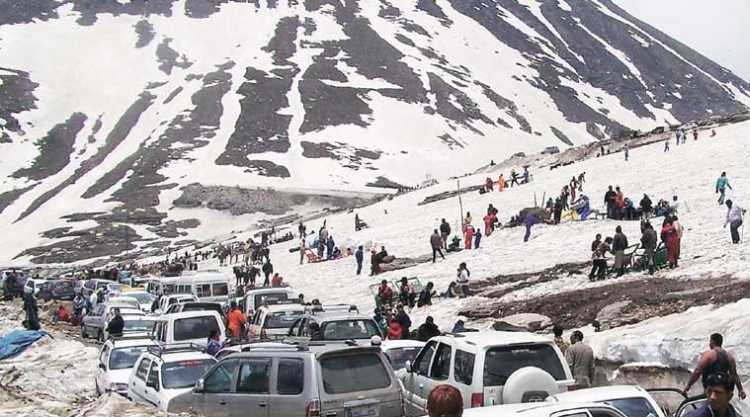 The side-effects of high human activity are now visible on Himalayas as well. The condition has worsened to such an extent that the National Green Tribunal (NGT) of India is forced to put a complete ban on entrance of petrol and diesel vehicle into Rohtang-Pass – a high mountain pass on the eastern Pir Panjal Range of the Himalayas. The cause, no doubt, is degradation of ecology.

According to scientists, the glacier at Rohtang-Pass (elevation 3,978 meters) is melting at a rate of 19-20 meters per year due to rising vehicular emission and emission from commercial activity in the area. The black-carbon emitted by vehicles is settling on glaciers around Solang, Rohtang Pass and Bias Kund. The blackened glaciers cause more absorption of heat, and eventually meltdown faster.

The NGT had reported,

“It was also observed that there was no system and manpower in place, not even dustbins, to collect garbage and municipal waste at Rohtang Pass and other eco-sensitive places. There was no system of transportation of garbage to dumping sites.”

The meltdown has further resulted in rise in flow of rivers that feed on glaciers and the temperature has also increased in the hill state. According to a report,

Now, this Himalaya region, one of the highest international tourist spots is struggling to save its fragile ecology.

The NGT had imposed the ban in May this year, but after protest from local cab drivers, restaurants, and others dependent on tourism for their livelihood, the NGT had given partial relief by allowing 1,000 vehicles (600 petrol, 400 diesel). Nearly 5,000 local residents are believed to have lost employment due to this decision.

The military vehicles are exception, and the residents in Lahaul-Spiti can get a permit from the DC Kullu to use petrol and diesel vehicles. That’s because, Rohtang-Pass connects Kullu to Lahual-Spiti.

However, the the Deputy Commissioner Rakesh Kanwar, has now issued a notification that bans all vehicles except CNG and electric ones. In July, Himachal Pradesh Government had run successful trials of two medium-sized CNG buses to check the feasibility for the introduction of the same.

The government has entangled itself into an inescapable trap. First of all, the cab drivers and other locals dependent on tourism such as small restaurants, snow-scooter owners etc. are now facing a huge financial crisis. The state government of Himachal Pradesh has no alternate solution for employment of locals. So, the locals are in a great unrest and protesting against NGT orders.

Secondly, the state requires about Rs 250 crore (about $384 million) in order to successfully running CNG buses. So far, the state has no CNG fueling station anywhere. The trail of two CNG buses costed Rs 25 lakh (approximately $3830). If the state government succeeds in running CNG buses at Rohtang-Pass, then it will be the world’s highest tourist spot to do so. Apparently, it’s a challenge.

That’s an expensive deal for Himachal. The transport minister GS Bali is preparing to ask centre government to release money for the arrangement of alternative transport for tourist activity.

Third, a study by CSIR revealed that CNG emission is not clean and causes cancer. The director general of CSIR, Dr MO Garg says,

“We did a study with a professor of Alberta University, who have developed a device to measure and analyze particles emitted by vehicles. We have installed this machine on the exhaust of a natural gas-run DTC bus in Delhi. Can you imagine that we found nanocarbon particles coming out of from natural gas combustion. These particles are moving around in the atmosphere and going straight into your lungs through your nose. It then enters into your blood through membranes.”

However, this study was challenged by an NGO Centre for Science and Environment. CSE analyzed the study and stated that the CNG buses work way far better than petrol and diesel vehicles.

Then, there is a group of activists who claims that there is actually no glacier at Rohtang-Pass to meltdown. In reply to Manali hoteliers association president Anup Thakur, Public Information Officer (PIO) of G B Pant Institute of Himalayan Environment and Development, had said that there is no glacier on top of Rohtang Pass.

Meanwhile, the state government isn’t taking responsibility of the mess it created in Himachal. The ecological issues were brought to the notice of state government about five years ago after researchers reported alarming rate of glacier meltdown. CNG buses and electric vehicles were also suggested by the environmental institutes to deal with the trouble. The government could have come up with a strong alternative for the locals during these years, but it didn’t.

While India’s capital city Delhi was declared world’s most polluted in 2015, other regions are not doing well too. Unfortunately, Himalayas have also come under its kill range. The glaciers feed many rivers. Millions of people are dependent of these rivers for supply of water for domestic use and irrigation. Disappearance of glaciers would hit them all. With second-largest population, isn’t doing well in preserving ecology. The government needs to do better to preserve what is left, or at least prologue the catastrophe.