Chemical pollution has turned two lakes fluorescent pink in a far-flung coastal region of Patagonia, in Argentina, causing a major stink in the area. Local environmentalists are still uncertain of the exact cause, but they fear that this change of color in the lakes could be caused by industrial contamination and could be noxious.

Both the lakes are located near an industrial park on the outskirts of the Argentine city of Trelew, sprawled across a dusty, desert-like plain. The officials of the municipality of Trelew recently discovered a truck dumping waste in the watershed, which has worried the environmentalists.

#Argentina | The Corfo Lagoon in Patagonia, has turned pink after waste from fishing companies was dumped in its waters, sparking alarm among local residents and authorities. pic.twitter.com/aayh76bJJc

According to the environmentalists, the lake water must have been contaminated by sodium sulfite, an antibacterial product used in fish factories that preserves prawns for exports. The chemical waste is supposed to be treated before it is dumped, but it seems that industries may have neglected the waste treatment procedures.

Residents have also reported that the pollution in the Chubut River, which feeds the Corfo Lagoon and other water sources in the region, has led to a foul smell in the area. This pink problem began when residents of nearby Rawson got tired of trucks carrying fish waste through their streets toward a treatment plant. When the residents protested by blocking roads and asked them to change the route, the provincial authorities allowed factories to discard their foul-smelling fish waste directly into Corfo Lagoon, which turned it pink and stinky.

Although the province’s environmental control board is downplaying this development by stating that it will disappear in a few days, people are unconvinced and scared that this change will impact them adversely. The chemical-heavy industries in the region are vital to the economy and offer much-needed jobs to a province of about 600,000 people. However, these multi-million-dollar profit companies do not want to spend money on taking the waste to a treatment plant about 35 miles away in Puerto Madryn or build a new plant closer to their locale. This lackluster attitude toward the health of the environment and locals has led to this frightful condition of these two lakes in the region. This water pollution is not only harmful to the people living in the vicinity of the lakes, but other species that depend on it for sustenance. 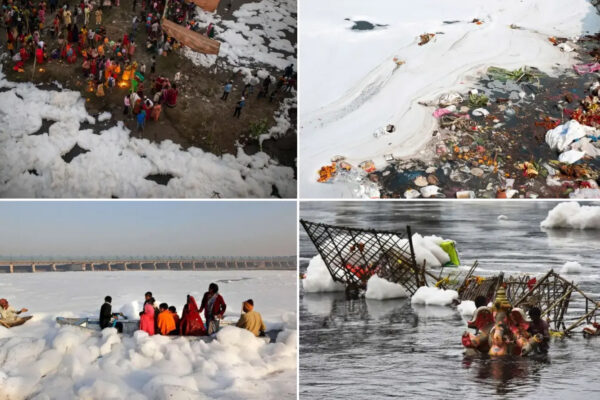