Wildfires have become a rather common occurrence with the rapidly changing climatic conditions. However, the severity of these events has risen drastically, resulting in the devastating loss of life and property. Currently, a series of major wildfire events is active on the western coast of the United States.

In the month of September, more fires were triggered across the US West Coast; and combined with strong winds, many of those fires have increased to unprecedented and record-breaking sizes. The US wildfires 2020 vividly remind of Australia wildfires that ravaged the island continent at the beginning of the year.

Record dry weather conditions in the US West Coast in late 2019 extended to January and February 2020, prompting initial concerns about wildfires from the state governments and environmentalists – similar conditions were reported from the rest of the west coast as well.

In late March, a state of emergency was declared by California Governor Gavin Newsom as a mass die-off of trees was observed throughout the state, potentially increasing the risk of fires. Oregon had officially declared the beginning of wildfire season in the state that same month.

Drought conditions in the region persisted as the light rain in late March and April did not bring any relief. Experts believed due to a delayed wet season, the dry conditions were likely to continue late into the year.

After wildfires started in Washington in April, many fires flared up throughout the West Coast, provoking burn ban restrictions in the Washington and Oregon in July. Washington experienced two big fires: the Stanwood Bryant Fire in Snohomish County (70 acres) and the porter Creek Fire in Whatcom County (80 acres). 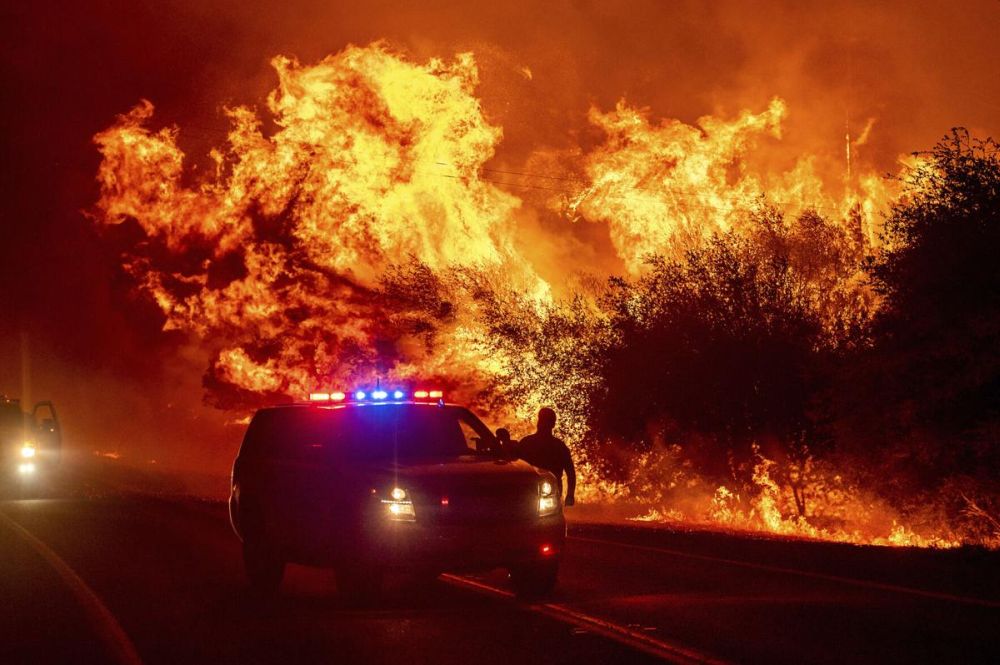 Meanwhile, the Oregon Department of Forestry declared fire season beginning July 5, 2020, indicating the end of unregulated debris burning outdoors, which is a major cause of wildfires.

In Washington in late July, a bush fire in Chelan County, the Colockum Fire, burned down at least an area of about 3,337 acres and caused a major evacuation in the area. The Greenhouse Fire near Nespelem town burned down 5,146 acres and prompted the evacuation of the Colville Tribal Corrections Facility and other structures.

In mid-August, Northern California experienced record-breaking warm temperatures, owing to anomalously strong high pressure over the region. The National Weather Service for San Francisco had issued a Fire Weather Watch, highlighting the risk of wildfires that were likely to ignite due to the combination of lightning risk due to moist, unstable air, dry fuels and hot temperatures near the surface. Soon, the Fire Weather Watch was upgraded to a Red Flag Warning, observing the risk of abundant lightning already apparent as the storms moved toward the region from the south.

Around the same time, the remnants of Tropical Storm Fausto triggered a massive series of lightning storms in Northern California and neighboring areas. Combined with dry weather, hot temperatures and high winds, the fires escalated rather quickly. Resultantly, on August 19, Governors Kate Brown and Jay Inslee declared a state of emergency for Oregon and Washington respectively.

Lightning initially triggered many of the fires, but it was unusual and extreme meteorological conditions that turned some of these fires into the worst conflagrations that the region has seen in decades. Record-breaking air temperatures, periods of unusually dry air, and blasts of fierce winds combined with severe drought conditions in some areas created favorable circumstances for wildfires to grow monstrously.

By August 20, the Palmer Fire near Oroville, Washington had reached 13,000 acres and forced evacuations of up to 85 homes. The largest of the fires in the Olympics reached 2.4 acres by August 20. On September 7, a catastrophic fire event combined with high winds resulted in 80 fires and nearly 300,000 acres burned in a day. By September 8, the Cold Springs Canyon and adjacent Pearl Hill Fires had burned over 377,000 and neither was contained properly. Smoke enveloped the Seattle area on September 8, causing unhealthy air conditions throughout the Puget Sound region and affected Southwest British Columbia.

The cities of Phoenix and Talent in Oregon were significantly destroyed by the Alameda Fire. State-wide at least 23 people were killed. On September 11, authorities revealed that they were preparing for a mass fatality incident. As of September 11, the Alameda Fire had destroyed 600 homes and 100 commercial buildings. The officials stated that the fire was man-caused; a man was arrested for arson, for allegedly starting a fire that destroyed multiple homes in Phoenix.

Forests, human settlements, wildlife, human lives – all turned to ashes. States have been preparing for a mass fatality incident. Over 4,000 homes in several towns in Oregon and California are severely damaged. Hundreds of thousands of people faced evacuation orders. Towns of Detroit, Blue River, Vida, Phoenix and Talent have been mostly destroyed by the wildfires.

Winds as high as 80km/h fanned dozens of catastrophic fires across a large swathe of Oregon and neighboring Washington state; places that rarely experience such intense fire activity because of the Pacific Northwest’ cool and wet climate.

According to Oregon Governor Kate Brown, the blazes, which also forced the evacuation of much of Medford in southern Oregon, could bring “the greatest loss in human lives and property due to wildfires in our state’s history.”

Nearly one hundred large fires have burned over 4.5 million acres in 12 states. Extreme behavior was reported on several large fires in Oregon, with many increasing to tens of thousands of acres. Evacuation orders are in place for residents near 42 large fires across the west. Over 28,000 firefighters and support personnel are assigned to work on controlling wildfires across the states. In California, more than 14,000 firefighters are struggling to battle fires and all 18 National Forests have been closed due to “unprecedented and historic fire conditions.”

To the south, the Creek Fire, about 35 miles north of Fresno, tore through the Sierra National Forest destroying 360 homes and structures. In Southern California, fires have been burning on Los Angeles, San Bernardino and San Diego counties.

Towns were decimated by infernos as firefighters were stretched to their limits. People leaving towns were engulfed by the fires. In Washington, a one-year-old boy was killed and his parents badly injured with third-degree burns, as they tried to flee the fire. As of September 14, the death toll has risen to 33; while officials are worried that the death toll could rise drastically as many people are missing from other blazes.

Fires continue to rage in southern Oregon, where hundreds of homes have been burned down, as well as last of Salem. Firefighters have traveled from Texas, Colorado and Utah to help fight the blazes, but the emergency response is stretched thin with many of the fires still not contained.

According to National Interagency Fire Center, a total of 41,147 fires have been reported so far this year, while the average number of fires through September 9 over the past 10 years is 43,915.

The intensely hot wildfires are not merely drawing people from their homes but causing toxic chemicals to seep into drinking water. Excessive heat warnings and suffocating air have threatened the health of people already struggling with the current coronavirus pandemic.

Washington state governor, Jay Inslee, argued that the fires should be called “climate fires” to highlight the role of climate change in the devastating wildfires.

LeRoy Westerling, a climatologist at the University of California Merced (UC Merced), has spent over two decades analyzing wildfires and the weather that steers them. He believes that the 2020 fires season will get worse as a lot of vegetation has yet to burn and dead trees and brush provide plenty of fuel to the fires.

Besides the loss of life and property, wildfires have fueled carbon emissions. Apparently, the wildfire incidents are likely to increase over time – becoming more severe, intense and hot. It will be no surprise if the world fails to achieve its set target of reducing emissions in The Paris Agreement.

Experts are concerned as the US wildfires 2020 seems like only the beginning of the long series of catastrophic events that are to befall on the planet and its inhabitants.