The park is located in the Western US, largely in the northwest corner of Wyoming, and extending into Montana and Idaho. It was established by the US Congress and signed into law by President Ulysses S. Grant in 1872.

Covering over 3,400 square miles, this national park is the centerpiece of the 20 million acres of the Greater Yellowstone Ecosystem (GYE), one of the largest nearly intact temperate-zone ecosystems on earth. This means that weather in the park’s various habitats — including wetlands, hydrothermal areas, grasslands and alpine regions— changes greatly between seasons and elevations, creating an extremely dynamic ecosystem. 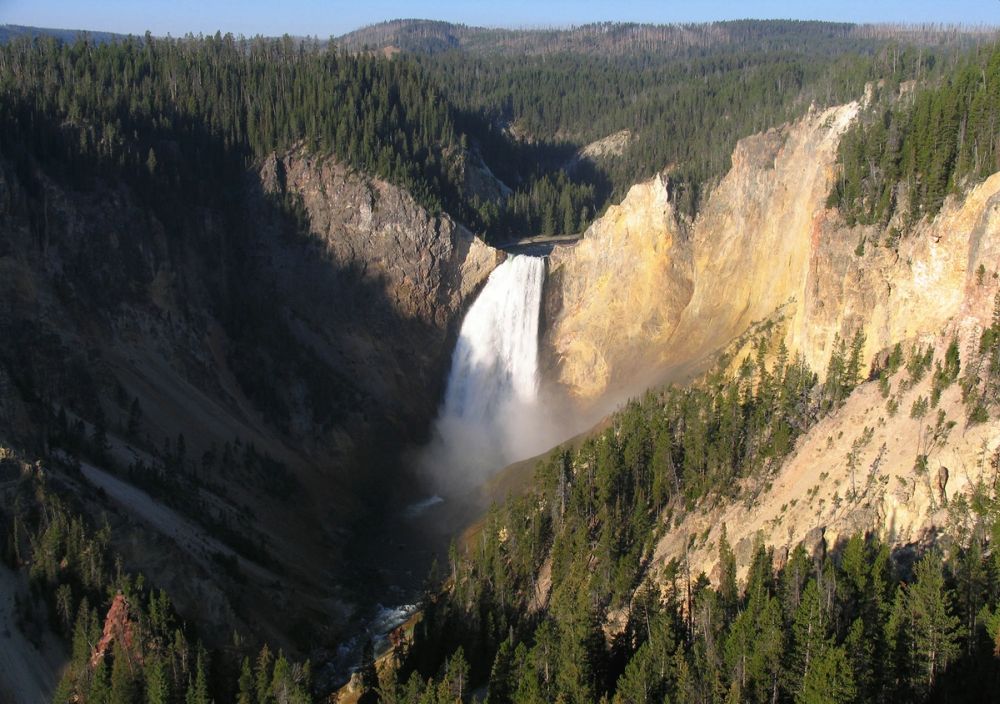 In 1978, the Yellowstone National Park was named a UNESCO World Heritage Site. Yellowstone is one of the many protected areas, preserving and nourishing endangered flora and fauna, which are threatened by obnoxious impacts of climate change. These changes are a threat to the precious wildlife and geological features of the park.

Distinctive Features of the Park

Yellowstone National Park is known for its wildlife and its many geothermal features, especially Old Faithful geyser, one of its most popular. It is home to more than half of the world’s hydrothermal features, winding streams, and unparalleled biodiversity.

Rich in biodiversity, there are hundreds of species of mammals, birds, fish, reptiles, amphibians have been documented, including many other species that are either endangered or threatened. Grizzly bears, wolves, and free-ranging herds of bison and elk inhabit the park.

The vast forests and grasslands also include unique species of plants. Yellowstone is home to three plant species that only exist within GYE – at least two of which are dependent on the unique habitat created by the park’s thermal features.

The park comprises plenty of lakes, canyons, rivers, and mountain ranges. Yellowstone Lake is one of the largest high-elevation lakes in North America and is centered over the Yellowstone Caldera, the largest supervolcano on the continent. The caldera and most of the park are located in the northwest corner of Wyoming.

The caldera lies over the Yellowstone hotspot under the Yellowstone Plateau, where light and hot magma (molten rock) from the mantle rises toward the surface. The hotspot appears to move across the terrain in the east-northeast direction, but in fact, the hotspot is much deeper than terrain and remains stationary while the North American Plate moves west-southwest over it.

The caldera was formed during the last three big events – the Huckleberry Ridge eruption 2.1 million years ago, the Mesa Falls eruption 1.3 million years ago and the Lava Creek eruption approximately 630,000 years ago. The area is constantly monitored by the US Geological Survey for signs in case an eruption is on the way.

Ever wonder about how the ground moves at #Yellowstone? In this short video, Yellowstone Volcano Observatory Scientist-in-Charge Mike Poland tells the story of the ups and downs of Yellowstone – how this deformation is measured, and the trends over the past 15,000 years! pic.twitter.com/hJoPo9AY8f

Over the past 18 million years or so, the hotspot has generated a succession of violent eruptions and less violent floods of basaltic lava. At least a dozen of these eruptions were so massive that they are classified as super-eruptions. As the Yellowstone National Park sits atop one of the biggest supervolcanoes on earth,  scientists worry that another massive volcanic eruption could destroy much of North America.

Volcanoes form mountains, supervolcanoes erase them. Volcanoes destroy plants and animals for miles around, supervolcanoes threaten whole species with extinction by changing the climate across the entire planet (sort of like what asteroids did to dinosaurs). Although scientists figure it could take around 70,000 years for this volcano to erupt again, it is essential that the Yellowstone ecosystem remains intact and unexploited.

The Yellowstone National Park ecosystem is shifting so rapidly due to climate change. There have been measurable impacts that threaten to fundamentally change Yellowstone’s protected lands and treasured resources. The average annual temperature across the GYE has risen above 2 degrees Fahrenheit in the last 70 years. Warmer temperatures have caused a decrease in the snowpack, drier conditions widespread die-offs of mature white-bark pine trees, invasive species outbreaks and changes to the timing rate of snowmelt.

With the changing climatic patterns, snow doesn’t accumulate as much or stay as long as it once used to. Summers are getting warmer and winters are getting shorter. The lack of moisture trickles down throughout the year, drying out plants earlier and eliminating food sources for animals such as elk. Migration patterns are already changing as a result.

Hotter and drier summers pave the way to more frequent and intense wildfires. The largest documented fires in the park’s history occurred in 1988 when a series of 50 fires burned approximately 800,000 acres. By the end of the 21st century, the hot and dry conditions that laid the groundwork for those devastating fires are expected to be the “normal” in Yellowstone National Park.

Scientists have been documenting every little change in the GYE to understand the intensity of the impacts of climate change. Over dozens of changes in the park in the past 50 years, including 30 fewer days with snow on the ground per year, 80 more days above freezing per year at the northeast entrance and higher average temperatures overall, especially during the nighttime.

Yellowstone National Park is home to more than half of the world’s active geysers, extraordinary hot springs, steam vents, fumaroles, and mud pots. These unique hydrothermal characteristics help create the foundation of the park’s ecosystem and are connected closely to the distribution of flora and fauna in the park. Climate change has already badly affected the intricate hydrothermal system’s ability to revitalize itself with water. For the system to recharge with ground-water, the slow seep that occurs with snow is preferable to the quicker runoff-like conditions experimental with rain. With the decrease in snowfall and snowpack levels, there will not be ample water in the hydrothermal system. The park’s iconic features, such as the Old Faithful Geyser and the Mammoth Hot Springs may dry up.

Forests cover about 80 percent of the park and provide habitat for wildlife such as lynx, grizzly bears, moose, and songbirds. Induced by climate change, higher temperatures, drier conditions, and invasive species outbreaks have been decimating the valuable flora and fauna in the Yellowstone National Park.

According to various studies, climate change will lead to a significant decrease in forest cover within the park – with high elevation species like the whitebark pine trees facing the brunt of the impacts. Across the region, rising temperatures and changes in precipitation patterns have led to more bark beetle outbreaks and increasingly frequent and severe wildfires.

These changes have induced mass die-offs of crucial plant species in the ecosystem. Recent surveys of whitebark pine trees in the GYE found a 79 percent mortality rate for mature trees – largely owing to the increased plagues of white pine blister rust and mountain pine beetles. The loss of whitebark pines poses a serious problem for the species depending on those trees for sustenance.

These trees are a keystone species that help reduce erosion, retains snow, and produce seeds that are a critical food source of grizzly bears and other wildlife. The decline of their food source severely impacts the migration patterns of the grizzly bears. Whitebark pines grow at high altitude in areas with high winds and steep slopes, where other trees cannot thrive. The loss of these trees leads to accelerated erosion and altered snowmelt and snow retention patterns, which impacts streamflow.

Moreover, the whitebark pine nuts help them fatten up for winter hibernation; but the loss of the tree is forcing the animals to abandon these isolated high elevation areas, leading them to search far and wide for food, which significantly increases the risk of conflict with humans and territorial disputes.

The changing climatic conditions are also expected to alter bison migratory and breeding patterns, with increasing numbers of bison already changing their breeding ranges and moving northward. The transfer of bison out of protected areas of Yellowstone National Park could put the animal in danger of getting killed by the sport hunters and ranchers.

As the Yellowstone National Park ecosystem is shifting in climate change, the new conditions are helping invasive species invade the region. Through wetter springs and hotter, drier summers, climate change has created favorable conditions for the growth of invasive plant species such as cheatgrass. The Gardiner Basin, the warmest area of the park, has witnessed major cheatgrass infestations in the past couple of years.

As the temperatures continue to rise, these invasive species are likely to outcompete native plants and spread into higher elevation areas. The high-density areas of this invasive species can change wildlife distribution in the park and harm, even eliminate the native plant communities – threatening the numerous wildlife species that depend on the native vegetation groups that currently thrive within the park area.

The invasive species often outcompete native plants, which provide more valuable forage for bison, and destroy the habitat by reducing forage availability in the winter and increasing fire frequency.

Efforts to Preserve the Park

In order to preserve many wildlife species and their natural habitat, it is essential to take action against the rapidly changing climate that is bound to wreak havoc, sooner or later. American authorities have taken a few necessary steps to protect the Yellowstone National Park from the harmful impacts of climate change.

It is crucial to understand that climate change and its effects need a dual approach to mitigation and adaptation. Increasing energy efficiency, sequestering carbon emissions and protecting old-growth forests that act as carbon sinks are just a few steps that can curb climate-warming emissions and reduce climate change impacts. Last year’s Dingell Act – the single most important and wide-reaching public land’s legislation package since the 1970s, was a historic and crucial step in the process of curbing the effects of climate change on the GYE. It permanently authorizes and funds the Land and Water Conservation Fund, protect national parks from nearby mining, and preserve the wildlife.

The implementation of a ban on plastic water bottle sales in national parks was yet another important step to curb the pollution, which helped protect the national park ecosystem.

But, the Trump administration’s aggressive “energy dominance” policies seem hell-bent on negating all the conservation efforts done by former administrations. Their policies reflect an attitude that public lands may as well contribute to climate change, rather than survive for Americans and future generations to enjoy if it means a few industry supporters make a quick buck.