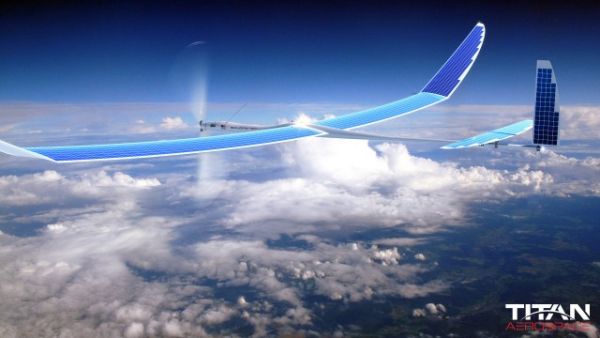 Facebook is said to be in discussion with Titan Aerospace regarding the acquisition of the company, or at least, to purchase the unmanned-solar-powered drones, which the company has been working on since last year. These drones are special as they equal low orbital satellites in operational capabilities like communication network in a range of 20 miles above earth somewhere between at a height of 60,000 to 70,000 feet. That’s a spot above all weather zones, and even the winds don’t blow over 5 knots.That means negligible disturbance in the service.

There are still farfetched areas in the world which are devoid of communication networks or any other of its type. Only in Africa, 5 billion people are looking to gain access to the ‘World Wide Web’. If Facebook could blanket these areas with the solar powered drones, then it could extend Internet service to these ‘would be Internet users’. Also, it’ll be a part of Internet.org initiative. The signal might be low but users will be able to access basic Internet service. Titan’s Solara 50 and Solara 60 drone models are perfect for this job.

There isn’t any surprise that Facebook is planning to deploy its own drones when the Internet giant Google already have done the same under its R&D effort called “Project Loon,”. Google has high-pressure balloons over the skies of New Zealand. It’s covering a very small portion, 50 Internet users, but it’s operational. Facebook might buy Titan for $60 million (as reports from Tech Crunch said

These drones are far cheaper than the present low orbital satellites. Their deployment would need far less initial investments, and they won’t need any additional fuel as the surface of the drone along with its tail is covered with photovoltaic cells. These cells can generate upto 7 Kilowatt of power a day to be stored in batteries. A Titan drone can stay above the ground for five years without requiring any refueling. More than that, what matters is the impression which the Facebook would likely to leave on the minds of billions of user who accessed the social media for the first time through the courtesy of none other than Facebook. If it could be done before Google’s ‘Loon Project’, it might fetch the company long term benefits. If you wish to read about the Titan drone models in details, then this article published in 201 on Arstechnica will sure help you. The coverage area of a Solara 50, superimposed over New York.