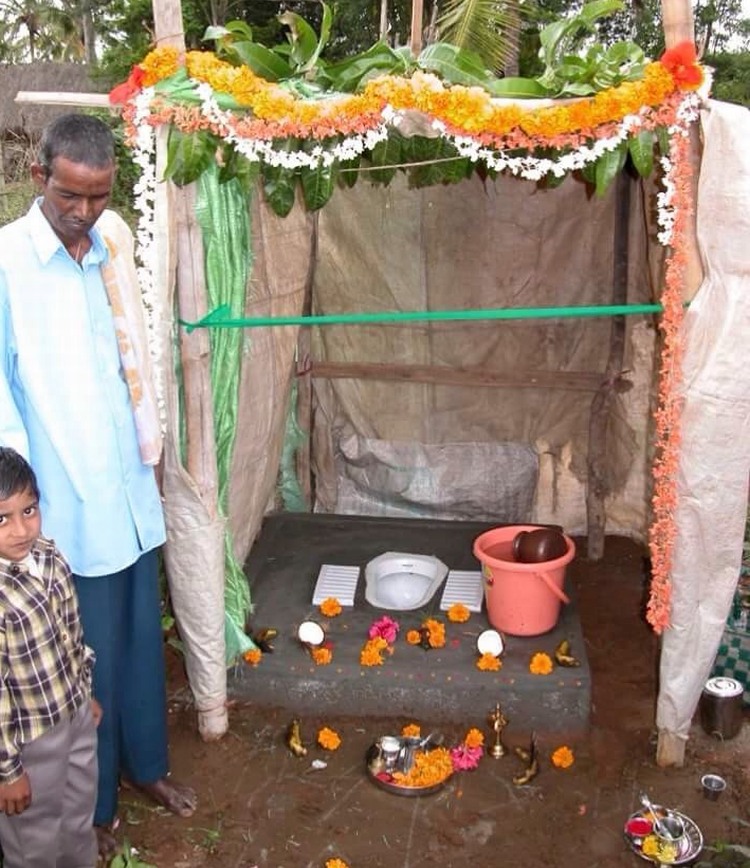 Indian Prime Minister Narendra Modi claims 100% success in eradication of open defecation under Swacch Bharat (Clean India) campaign. Against a target of about six million toilets in rural areas, he claims construction of about nine million in one year. The irony is, rural people in the country are worshiping these newly constructed toilets instead of using them.

It’s less about humor or ridiculing poor people, for whom, a toilet is a big privilege, perhaps, the only privilege. However, there is something symbolic about the inaugural toilet-worship ceremony. Such inaugural events are common as people believe a ritual ceremony will ensure the good beginning and bright future ahead whenever something new is bought or built or a job is undertaken, such as a new car, a new home, new office building, shops, agricultural machines etc.

One of such auspicious moments was captured on camera somewhere in India, which explains just why building millions of toilets in India can not eliminate the practice of open defecation.

At one of such homes in poverty-stricken rural India, residents inaugurated a newly built toilet by performing proper pooja (worship or ritual performance). The toilet seat and floor of toilet were covered with flowers, while coconut and bananas were offered to the God of toilets (if something like that exists).

A plate was placed on the ground, in front of the toilet filled with a cup of sindoor (vermilion), an essential part of most of the Indian religious ceremonies, and a glass full of milk as another offering. The toilet, that is nothing more than a latrine-seat, covered with discarded empty rice and wheat sacks, is decorated with garlands and mango leaves. A green ribbon awaited the arrival of a lucky one who was scheduled to inaugurate the toilet.

Most likely, this toilet, like millions of others which were built during the period of the last 12 months, might not be used. It’s a reality and a huge obstacle for Clean India Campaign that despite the availability of toilets, people, especially males, prefer to defecate in open.

West mocks at India’s obsession for worshiping cows, stones and pervert self-claimed godmen, such as Assaram Bapu, who serves a prison term for rape of a minor girl studying in one of his schools. So, toilet worship shouldn’t be a surprise in rural regions where people have never seen one.

In rural India a facility like a toilet is an alien privilege. People in rural India still believe it’s an unhygienic and unholy practice to have a toilet within house premises, many others don’t know how to use and why to use toilets.

In January 2015, the Indian government accepted that monitoring toilet use is also essential. According to a report on BBC:

Studies in the past have suggested that many people in rural India, despite having working toilets at home, continue to go out into the open believing it is more sanitary to defecate far from home.Hundreds of millions of people defecating outside leads to large numbers of hygiene-related diseases and premature deaths. Reports say some of the new toilets are being used as storerooms by people who consider toilets at home unhygienic. Campaigners say that building toilets is not enough and that motivating people to use them is equally important.

However, in August 2015, another report on the Washington Post threw light on the progress of the government in educating people about toilet use. It claimed that the Indian government’s sanitation drives failed to sway those who believe going outdoors is more wholesome.

According to Santosh Kumar Singh, who is looking after the sanitation driver in Uttar Pradesh, the most populous state of India with the highest rate of open defecation,

We are not facing any problem in the case of construction, but the major issue of toilet usage is our challenge, and regarding this we are helpless.

A web of other cast and culture-based issues are also responsible for such attitude of people.

Sangita Vyas, from RICE, throws light on referring to India’s rigid caste system which prescribes that dealing with human waste is the responsibility only of those at the very bottom of the social hierarchy. She further adds,

Emptying a pit in any other developing country… doesn’t carry a social stigma in the same way as it does in India. Anybody who is of a higher caste would find it unthinkable do it themselves, and at the same time… people from lower castes are trying to avoid doing this type of work because it’s associated with their past and oppression.

Anil Prajapati, chairman of the Gujarat Sanitation Development Organisation, also agrees that the cultural and social beliefs, superstition is some cases, are creating obstacle in sanitation drive and said,

We’ve made public toilets but people still don’t use them,” said Anil Prajapati, chairman of the Gujarat Sanitation Development Organisation. Some of these people fear that there are witches inside or that their children will be kidnapped.These people have come from small villages, and so they are not used to the practice.

The government definitely needs to carry out aggressive awareness campaigns to convince them to use toilets and give up the practice of unhygienic open defecation that is responsible for the death of 600,000 people annually.

About 620 million people defecate in open in the country. A survey conducted by the Research Institute for Compassionate Economics Sanitation Quality, Use, Access and Trends shows that out of interviewed 22,000 people in five Indian states, 40 percent of households with a working latrine have at least one member who still defecates in the open.

Another study by the BMC Public Health states,

“Strongly ingrained beliefs around impurity and pollution and the required rituals for purification and cleansing post-defecation in Indian society may play a big part in the choice to continue defecating in the open”.

Government claims of 100 percent success in building separate toilets for boys and girls in every school in India seem false. The government is only focusing on haphazard construction of toilets and ignoring the need for educating or training people to use these toilets.